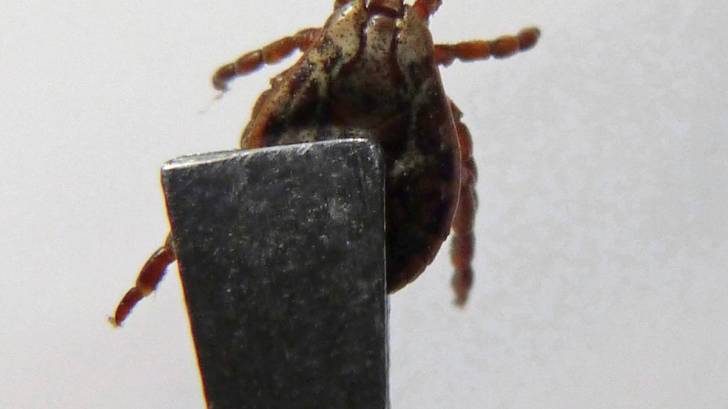 A new, free service by East Stroudsburg University (ESU) is testing ticks for diseases, such as Lyme disease.

Through their bites, ticks expose humans to a remarkable array of pathologic agents, including neurotoxins, allergens, bacteria, parasites, and viruses.

This new service launched in April 2019 and is reporting very concerning information.

The initial results from 10,998 completed tests indicate 32 percent of tested-ticks were infected with disease.

This free tick-testing service is provided by the Pennsylvania Tick Research Lab (PTRL), based in East Stroudsburg, Pennsylvania.

The PTRL can analyze your tick for the presence of 18 tick-borne pathogens that cause diseases such as Lyme disease, Anaplasmosis, Babesia, Bartonella, Ehrlichiosis, Tularemia, B. miyamotoi, Mycoplasmosis, Southern Tick-Associated Rash illness, and Rocky Mountain Spotted fever.

According to reporting by Pennlive, Nicole Chinnici, laboratory director at the PTRL, said ‘although a tick may test positive for a pathogen, the transmission process is complicated and the number of factors determines whether a person is actually infected.’

These factors include the length of time the tick was biting the individual and the number of bacteria within the tick.

“Some of the diseases are transmitted within 15 minutes,” Chinnici said.

It is frequently stated by researchers ‘that the risk of infection is very low if an attached tick is removed within 24 hours or 48 hours.’

And the PTRL testing process is very simple to follow:

Unfortunately, without preventive vaccines available, researchers are projecting additional tick-borne disease cases will be reported in 2019.

The tick responsible for most Lyme diseases cases has boomed from near non-existence in the 1960s, to become the most commonly found tick across the state of Pennsylvania, according to new research published on May 9, 2019.

“Right now, the dominant tick species is Ixodes scapularis, or black-legged tick (deer tick), which is the primary vector of Lyme disease,” said Joyce Sakamoto, an assistant research professor of entomology in the Penn State College of Agricultural Sciences.

Furthermore, the Centers for Disease Control and Prevention (CDC) notes a 3.5-fold increase in vector-borne diseases from 2004-2016, with more than 76 percent of cases caused by tick-borne pathogens.

Individuals spending time outside this summer can take other steps to protect themselves from tick-borne diseases. The CDC recommends anyone hiking in the woods to wear light-colored clothing that covers exposed skin during outdoor activities and use insect repellent.

After returning inside, people should check their clothing, body, and pets for ticks.

The CDC also recommends taking a shower within 2 hours after returning home.

This tick-testing service in Pennsylvania was created by a task force at the Department of Health to educate the public about Lyme disease and related tick-borne illnesses and collaborate with other key agencies.