The type 2 novel oral polio vaccine (nOPV2) polio vaccine is derived from the live, infectious virus, but it has been 'triple-locked' using genetic engineering to prevent it from becoming harmful. As a result, nOPV2 is genetically more stable than existing oral polio vaccines (OPV), with a lower risk of reversion to neurovirulence. In addition, this nOPV vaccine produces a gut reaction that protects the individual from disease and stops transmission using a more stable version of the OPV, which is much less likely to mutate and cause paralysis.

On November 13, 2020, the nOPV2 vaccine was deployed under World Health Organization (WHO) Emergency Use Listing procedure (EUL) to enable rapid field availability for use in countries affected by circulating vaccine-derived poliovirus type 2 (cVDPV2) outbreaks. On June 4, 2019, The Lancet published the finding of the initial phase 1 clinical trial conducted in 2017 at the University of Antwerp, which found nOPV2 to be safe and efficacious.

The U.S. Centers for Disease Control and Prevention (CDC) confirmed on June 17, 2022, given the background immunity, population dynamics, and scale of use, the consistent pattern of genetic characteristics of nOPV2 isolates is encouraging. In addition, the CDC's Advisory Committee on Immunization Practices (ACIP) presentation on October 19, 2022, confirmed the nOPV2 is more genetically stable and less likely to be associated with the emergence of cVDPV2 and can provide mucosal immunity to limit the virus's spreading among IPV-vaccinated people.

As of January 2023, the nOPV2 is not authorized by the U.S. Food and Drug Administration (FDA). However, since the nOPV2 launch in March 2021, approximately 575 million doses have been administered in more than 25 countries worldwide, including Nigeria. In 2022, 385 million nOPV2 doses were administered across 22 countries.

The WHO Listed the nOPV2 vaccine produced by Bio Farma, Indonesia, for emergency use on November 13, 2021. Bio Farma, located in Jakarta Selatan 12190, is among 29 vaccine manufacturers in 22 countries with WHO Prequalification.

An additional 15 countries have met the requirements for nOPV2 use in the event of an outbreak. In addition, on March 30, 2022, the GPEI released an updated version of the Standard Operating Procedures to guide any country's management that detects poliovirus outbreaks.

On December 9, 2021, the WHO recommended that all travelers to polio-affected areas be fully vaccinated against polio. In addition, residents (and visitors for more than four weeks) from infected areas should receive an additional dose of oral polio vaccine or inactivated polio vaccine within 1 to 12 months of travel.

A research study published in npj Vaccines on February 11, 2022, confirms that nOPV2 is more stable against virulent mutations than licensed OPV2. This study directly assesses whether shedding nOPV2 virus against shed OPV2 virus in comparable groups. Furthermore, it shows that the attenuated nOPV2 vaccine is more resistant to reversion than OPV2.

The nOPV2M4a Polio Vaccine is indicated to prevent circulating vaccine-derived polio-virus (cVDPV) polio cases. Most cases of cVDPV are caused by mutations in a strain of poliovirus called type 2. the novel vaccine will eventually be licensed based on three criteria: a similar safety profile to the currently licensed mOPV2 of the Sabin strain, non-inferior immunogenicity, and reduced reversion to virulence.

A review of safety data on the first 65 million doses of nOPV2 used for outbreak response by the independent Global Advisory Committee on Vaccine Safety concluded that there were no apparent safety concerns.

December 9, 2022 - The WHO announced as the traditional head of the Gagi Nigerian community, Sokoto State, Northwest Nigeria, Alhaji Sani Umar Jabbi, insists that every child in his district must be vaccinated with polio vaccines.

November 25, 2022 - The WHO released nOPV2 vaccines for use by Indonesia for approximately 95,000 children.

October 16, 2022 -  The Gates Foundation announced it would commit $1.2 billion to support polio vaccinations.

October 11, 2022 - Since the 68th session of the Regional Committee, vaccination campaigns have resumed in Afghanistan, and the Region has implemented outbreak response campaigns using the nOPV2 vaccine. Sustained efforts have led to the closure of a poliovirus outbreak in Sudan and a high-risk event in the Islamic Republic of Iran.

September 23, 2022 - The Lancet published: A novel tool to eradicate an ancient scourge: the novel oral polio vaccine type 2 story. Monitoring the use of nOPV2 has confirmed it is more genetically stable and less likely to result in VDPV than the Sabin strain, suggesting that the target of the global eradication of poliomyelitis might be a little more attainable than previously believed.

September 13, 2022 - The WHO was notified of a circulating vaccine-derived poliovirus type 2 (cVDPV2) with acute flaccid paralysis from Tamanrasset province, southern Algeria, On 8 July 2022. This represents the first cVDPV2 case identified in the country.

April 28, 2022 - The polio outbreak in Tajikistan marked the first detection of cVDPV2 in the WHO European Region and is the first cVDPV2 outbreak in the world to be declared officially closed following supplemental immunization using the nOPV2 vaccine.

April 7, 2022 - The WHO's Strategic Advisory Group of Experts on immunization is convening in Geneva and will review updated data on novel oral polio vaccine type 2 (nOPV2) use and recommendations on initial planning for OPV cessation. The SAGE noted that a framework for a comprehensive analysis of nOPV2 performance is under development and requested periodic updates on the safety and genetic stability data of nOPV2.

March 18, 2022 - The WHO confirmed the first phase of the polio vaccination campaign targets 9.4 million children in Malawi, Mozambique, Tanzania, and Zambia. In which Zimbabwe will also participate, three subsequent rounds are set for April, June, and July 2022 and aim to reach over 23 million children with more than 80 million doses of the bivalent Oral Polio Vaccine recommended for wild poliovirus (type 1).

March 17, 2022 - PLOS One published a RESEARCH ARTICLE: Use of oral polio vaccine and the incidence of COVID-19 inworldwideConclusions: Countries using OPV have a lower incidence of COVID-19 than those using IPV. This might suggest that OPV may prevent SARS-CoV-2 infection at an individual level or slow down the transmission at the community level.

February 11, 2022 - The journal NPJ Vaccines published a study that concluded: The available data from a key target age group for outbreak response confirm the superior genetic and phenotypic stability of shed nOPV2 strains compared to shed Sabin-2 and suggest that nOPV2 should be associated with less paralytic disease and potentially lower risk of seeding new outbreaks.

November 23, 2021 - The WHO announced the polio Committee unanimously agreed that the risk of the international spread of poliovirus remains a Public Health Emergency of International Concern and recommended the extension of Temporary Recommendations for three months.

November 3, 2021 - The BMJ reported that house-to-house polio vaccinations restarted in Afghanistan after a three-year pause, where polio cases have been reported.

October 26, 2021 - The WHO Africa posted an article: Pursuing the endgame: novel polio vaccine rollout in Africa.

October 11, 2021 - Following a careful review of the safety and genetic stability data from mass immunization campaigns conducted with the novel oral polio vaccine type 2 (nOPV2), the Strategic Advisory Group of Experts on immunization (SAGE) today endorsed the transition to the following use phase for the vaccine.

March 19, 2021 - The WHO reports that four paralytic children infected with circulating vaccine-derived poliovirus type 2 (cVDPV2) have been reported in Tajikistan, with several cVDPV2 cases detected in the community and close contacts.

March 13, 2021 - nOPV2 will be rolled out in Africa to fight outbreaks of vaccine-derived poliovirus type 2. Poor polio strains occur in under-immunized communities with limited access to safe water and sanitation.

October 29, 2020 - New polio vaccine designed to prevent harmful mutations is poised to get emergency WHO approval.

October 22, 2020 - The twenty-sixth meeting of the Emergency Committee under the International Health Regulations (2005) on poliovirus's international spread was convened. The Emergency Committee reviewed the data on wild poliovirus (WPV1) and circulating vaccine-derived polioviruses (cVDPV). In addition, the following IHR States Parties provided an update at the video conference or in writing on the current situation in their respective countries: Afghanistan, Chad, Egypt, Guinea, Pakistan, Somalia, South Sudan, Sudan, and Yemen.

July 29, 2021 - The journal Nature published the results of a study - Because of the safety, immunogenicity, and promising phenotypic stability of these viruses, nOPV2 use under Emergency Use Listing (EUL) features prominently in the Global Polio Eradication Initiatives' new strategy to stop further spread of cVDPV21. The EUL has recently been granted for nOPV2-c1. The methods described here are now being applied to shed virus from paired phase 4 and phase 2 clinical trials of mOPV2 and nOPV2 in children and infants, allowing a more direct comparison of the molecular evolution and virulence of shed nOPV2 viruses with shed Sabin 2 in the age groups that will be the focus of outbreak responses.

April 4, 2019 - The UNICEF Supply Division Team from Copenhagen came to Bio Farma to discuss the joint procurement of mOPV2 global stockpiling in a final product of 60 million doses or 3 million vials that must be prepared in 2019.

nOPV2 polio vaccine is in several clinical studies that are in various stages. Clinical summaries for the nOPV2 vaccine. 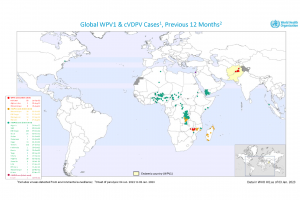 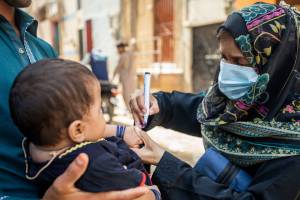 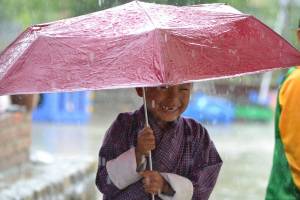