Bharat Biotech International's Typbar TCV® is a vaccine containing polysaccharide of Salmonella typhi Ty2 conjugated to Tetanus Toxoid. A human challenge study at the University of Oxford demonstrated that the vaccine is safe, 100% immunogenic, and prevents up to 87.1% of infections when using real-life definitions of typhoid fever.

A human challenge study at the University of Oxford demonstrated that the vaccine is safe, immunogenic, and prevents up to 87.1% of infections using real-life definitions of typhoid fever.

A mathematical modeling study supported by Gavi published on February 3, 2022 - Estimating the effect of vaccination on antimicrobial-resistant typhoid fever in 73 countries - found the introduction of routine immunization with TCV at age nine months with a catch-up campaign up to age 15 years was predicted to avert 46–74% of all typhoid fever cases.

The peer-review journal The Lancet published an early-release (September 1, 2022) phase 3 study funded by the Gates Foundation - Safety and immunogenicity of a typhoid conjugate vaccine among children aged 9 months to 12 years in Malawi: a nested substudy of a double-blind, randomized controlled trial. This study provides evidence of TCV vaccination safety, tolerability, and immunogenicity up to 730–1,035 days in Malawian children aged 9 months to 12 years.

Typbar TCV is the only U.S. FDA-approved vaccine for children less than two years of age. Typhoid fever caused by multidrug-resistant H58 Salmonella Typhi is an increasing public health threat in sub-Saharan Africa. In addition, Typbar TCV has been recommended by the experts at the WHO-Strategic Advisory Group for routine immunizations and is WHO prequalified.

Bharat Biotech is a pioneering biotechnology company known for its world-class R&D and manufacturing capabilities.

Vaccination can help prevent typhoid fever which is an acute enteric disease caused by Salmonella enterica serovar Typhi (S Typhi). S Typhi is a rod-shaped, gram-negative, anaerobic bacterium, which expresses a surface polysaccharide capsule (Vi antigen), an important determinant of virulence. The U.S. CDC recommends vaccination for people traveling to places where typhoid fever is common says the U.S. CDC. Typhoid fever remains a significant cause of morbidity and mortality in low-income and middle-income countries, says the WHO. Typhoid fever, a systemic febrile illness caused by Salmonella enterica serovar Typhi, is responsible for more than 9 million infections and more than 110,000 deaths globally each year. The highest disease burden was observed among children.

The Typbar TCV vaccine is indicated as a preventative vaccine against Typhoid, which Salmonella Typhi and Paratyphi cause. If it is not treated, it can kill up to 30% of people who get it. Some people who get Typhoid become "carriers," who can spread the disease to others. Curbing typhoid transmission can also prevent resistant plasmid transfer to other bacterial pathogens. Our results can help to inform country-level decision-making and prioritize TCV introduction in countries with a high burden of antimicrobial-resistant typhoid fever.

The WHO recently recommended that routine childhood immunization programs include Typbar TCV as a single intramuscular dose for primary vaccination of infants and children from 6 months of age. It is also recommended for adults ≤45 years of age and in catch-up campaigns in typhoid-endemic regions in children ≤15 years of age.

August 10, 2022 - A new study finds the Typbar TCV® vaccine provides immunity for up to three years in children as young as nine months old and is safe and well tolerated. Importantly, the vaccine can be given to nine-month-old infants at the same time as routine measles-rubella vaccinations without reducing the immune response to either vaccine.

June 21, 2022 - The Lancet Microbe reported while multi-drug resistance to first-line antibiotics has generally declined in South Asia, strains resistant to macrolides and quinolones – two of the most important antibiotics for human health – have risen sharply and spread frequently to other countries.

April 7, 2022 - With support from Gavi, the Vaccine Alliance, WHO, UNICEF, and other partners, the Government of Nepal today launched a new vaccine campaign introducing Typhoid Conjugate Vaccine into the routine immunization program. The campaign aims to reach 95% coverage of nearly 7.5 million children.

February 3, 2022 - A meta-analyses of disease burdens in 73 countries eligible for support from Gavi, Birger, and colleagues has shown that introduction of routine immunization of children from age nine months with typhoid conjugate vaccines, with a catch-up program up to age 15 years, would avert about 66 million cases and 826,000 deaths caused by typhoid fever over ten years.

November 1, 2021 - The Lancet Global Health published the final results of the Phase 3 clinical trial. These results are from the 2-year follow-up of 20,019 children aged 9 months to < 16 years of age. The final results are similar to the interim results. There is no evidence of waning protection over the two years. These results support the WHO recommendations to vaccinate children in endemic typhoid settings.

September 16, 2021 - The New England Journal of Medicine published a study that found a single dose of typhoid conjugate vaccine is safe and 84 percent effective in protecting against Typhoid in Blantyre, Malawi. An intention-to-treat analysis comparing this incidence with that in the Vi-TCV group yielded a protective efficacy of Vi-TCV of 80.7%. The effectiveness of Vi-TCV was similar in children who were younger than five years of age and children who were five years of age or older at the time of vaccination, and this efficacy remained consistent throughout the observation period.

August 21, 2021 - Recent data confirmed Bangladesh has one of the highest typhoid burdens in the world. A study conducted in Mirpur, Dhaka, with typhoid conjugate vaccine (TCV) has found that the vaccine prevents 85% of cases among vaccinated children aged nine months to 15 years.

August 9, 2021 - A new study conducted in Mirpur, Dhaka, with typhoid conjugate vaccine (TCV) and published by The Lancet found that the vaccine prevents 85% of cases among vaccinated children aged nine months to 15 years.

April 5, 2021 - Liberia became the first country in Africa to introduce the typhoid conjugate vaccine (TCV) with a weeklong campaign to reach more than 1.9 million children aged 9 months to younger than 15 years old with TCV. After the campaign concludes, TCV will become a routine immunization for all children at 9 months old.

February 1, 2021 - The next step: Lifesaving typhoid conjugate vaccines reach Punjab province, Pakistan. For the next two weeks, vaccination teams will be in Islamabad and 12 districts of Punjab province to vaccinate nearly 12.7 million children between 9 months to 15 years against Typhoid. Keeping children protected against typhoid diseases, we help keep children in school and spare families the economic hardship of typhoid diagnosis and treatment.

January 4, 2021- How a scientist's return kickstarted Bharat Biotech's journey. The company also developed and launched Typbar TCV, the world's first clinically proven and WHO prequalified typhoid conjugate vaccine (TCV), which can be administered to even a six-month-old.

September 30, 2020 - Travel Alert: Extensively Drug-Resistant Typhoid Fever in Pakistan. The CDC recommends that all travelers (even short-term travelers) to South Asia, including Pakistan, be vaccinated against typhoid fever before travel.

November 18, 2019 - Pakistan became the first to introduce typhoid conjugate vaccines (TCV) into the routine immunization system, and the world watched. Nearly 10 million children were vaccinated in just three weeks in Sindh province, protecting them against a potentially deadly disease and sparing their families the economic hardship that so often comes with a case of Typhoid.

January 3, 2018 - Typbar TCV from Bharat Biotech, World's First Typhoid Conjugate Vaccine Prequalified by WHO. This enables the procurement and supplies of this lifesaving vaccine to UNICEF, Pan-American Health Organization, and GAVI-supported countries. In addition, Typbar TCV® has been evaluated in Human Challenge Studies at Oxford University, and typhoid conjugate vaccines have been recommended by WHO's Strategic Advisory Group of Experts on Immunization (WHO-SAGE).

Clinical Trial NCT03299426: Among Malawian children 9 months to 12 years of age, administration of Vi-TCV resulted in a lower incidence of blood culture-confirmed typhoid fever than the MenA vaccine.

Clinical Trial NCT03933098: Immune Non-inferiority and Safety of a Vi-DT Typhoid Conjugate Vaccine. This is a Multicenter, observer-blinded, randomized, Active controlled, Phase 3 study in healthy 6 months to 45 years aged Nepalese at the time of the first vaccine dose. 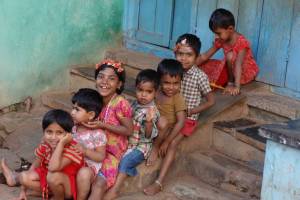