INO-4500 is a DNA vaccine candidate. On November 17, 2022, the company discontinued the development of product candidates targeting Lassa Fever (INO-4500) following initial analyses of data from studies conducted by INOVIO and funded by CEPI.

In addition, INOVIO is leveraging its optimized plasmid design and delivery technology to develop DNA medicines to treat and prevent infectious diseases. INO-4500 is the first vaccine candidate for Lassa fever to enter human trials, says the company.

INOVIO's DNA medicines deliver optimized plasmids directly into cells intramuscularly or intradermally using one of INOVIO's proprietary hand-held CELLECTRA smart devices. INOVIO's DNA medicines are made using a process called SynCon®. SynCon uses a proprietary computer algorithm designed to identify and optimize the DNA sequence of the target antigen, whether it is a virus or a tumor. Once this sequence has been determined, the DNA is synthesized or reorganized, and manufacturing can begin, says the company.

DNA medicines are composed of optimized DNA plasmids, which are small circles of double-stranded DNA synthesized or reorganized by computer sequencing technology and designed to produce a specific immune response in the body.

Plymouth Meeting, Pennsylvania-based INOVIO is a biotechnology company focused on rapidly bringing to market precisely designed DNA medicines to treat and protect people from infectious diseases, cancer, and diseases INOVIO has 15 DNA medicine clinical programs currently in development focused on HPV-associated diseases, cancer, and infectious diseases, including coronaviruses associated with MERS and COVID-19 diseases being developed under grants from the Coalition for Epidemic Preparedness Innovations and the U.S. Department of Defense.

The U.S. CDC says Lassa fever is an animal-borne, or zoonotic, acute viral illness. It is endemic in West Africa, including Sierra Leone, Liberia, Guinea, and Nigeria. Neighboring countries are also at risk, as the animal vector for the Lassa virus, the "multimammate rat" (Mastomys natalensis), is distributed throughout the region.

The illness was discovered in 1969 and is named after the town in Nigeria where the first cases occurred. An estimated 100,000 to 300,000 infections of Lassa fever occur annually, with approximately 5,000 deaths, says the CDC. Unfortunately, surveillance for Lassa fever is not standardized; therefore, these estimates are crude. However, in some areas of Sierra Leone and Liberia, it is known that 10-16% of people admitted to hospitals annually have Lassa fever, demonstrating the serious impact the disease has on the region.

The INO-4500 vaccine is conducting clinical tests for the prevention of Lassa Fever. Inovio's proprietary Cellectra electroporation device injects this vaccine into the muscle or skin. Injection of the DNA plasmid into a patient generates robust in vivo monoclonal antibody production. Thus, this approach can potentially generate in vivo production of therapeutic antibodies.

March 22, 2022 - The UK NHS confirmed a systematic review examining preclinical and human pharmacokinetic data and found that the clinical evidence for ribavirin as a treatment for Lassa fever was limited.

February 21, 2022 - The WHO stated 'Considering the seasonal increases of cases between December and March, countries in West Africa that have endemic Lassa fever are encouraged to strengthen their related surveillance systems to enhance early detection and treatment of cases and to reduce the case fatality rate, as well as to strengthen cross border collaboration.'

February 9, 2022 - The UK Health Security Agency press office confirmed two people had been diagnosed with Lassa fever in the East of England. Before these cases, 8 cases of Lassa fever were imported to the UK since 1980. The last 2 cases occurred in 2009. There was no evidence of onward transmission from any of these cases.

October 26, 2021 - INOVIO announced its Phase 1B clinical trial for INO-4500, its DNA vaccine candidate for Lassa fever, and completed full enrollment of 220 participants. This trial is ongoing at the Noguchi Memorial Institute for Medical Research in Accra, Ghana. It is the first vaccine clinical trial for Lassa fever conducted in West Africa, where the viral illness is endemic.

October 11, 2018 - According to new research published in Nature Communications, a novel vaccine designed to protect people from Lassa fever and rabies showed promise in preclinical testing. The investigational vaccine, called LASSARAB, was developed and tested by scientists at Thomas Jefferson University in Philadelphia; the University of Minho in Braga, Portugal; the University of California, San Diego; and the National Institute of Allergy and Infectious Diseases (NIAID), part of the National Institutes of Health. 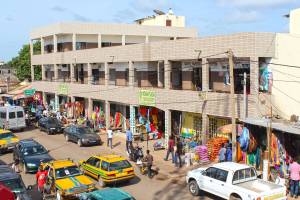