NVX-CoV2373 is a prefusion protein coronavirus vaccine candidate made using Novavax’s proprietary nanoparticle technology, Matrix-M, which is an adjuvant to enhance immune responses and stimulate high levels of neutralizing antibodies.

Novavax’s patented saponin-based Matrix-M adjuvant has demonstrated a potent and well-tolerated effect by stimulating the entry of antigen-presenting cells into the injection site and enhancing antigen presentation in local lymph nodes, boosting immune response and helping an immunized person make antibodies against the virus.

A Phase 1 clinical trial of NVX‑CoV2373 initiated in Australia during May 2020. On August 4, 2020, Novavax announced the Phase 1 data from its Phase 1/2 clinical trial found the recombinant COVID-19 vaccine candidate adjuvanted with Matrix-M, was generally well-tolerated and elicited robust antibody responses numerically superior to that seen in human convalescent sera.

All subjects in this study developed anti-spike IgG antibodies after a single dose of vaccine, many of them also developing wild-type virus-neutralizing antibody responses, and after Dose 2, 100% of participants developed wild-type virus-neutralizing antibody responses. Both anti-spike IgG and viral neutralization responses compared favorably to responses from patients with clinically significant COVID‑19 disease.

Importantly, the IgG antibody response was highly correlated with neutralization titers, demonstrating that a significant proportion of antibodies were functional.

And, the adjuvant was dose-sparing, with the lower 5 µg dose of NVX‑CoV2373 performing comparably with the 25 µg dose. Cellular immune responses were measured in a subset of participants, and NVX‑CoV2373 induced antigen-specific polyfunctional CD4+ T cell responses with a strong bias toward the Th1 phenotype (IFN-g, IL-2, and TNF-a).

On September 2, 2020, the New England Journal of Medicine published further detail on the previously announced results, in which NVX‑CoV2373 demonstrated a reassuring safety and reactogenicity profile and induced robust antibody responses numerically superior to that seen in human convalescent sera.

The Phase 2 portion will assess immunity, safety, and COVID-19 disease reduction in up to 1,500 volunteers in the USA and Australia, with approximately 50 percent between 60 and 84 years of age.

Novavax was awarded $1.6 billion by the federal government as part of Operation Warp Speed (OWS). The OWS funding is being used by Novavax to complete late-stage clinical development, including a pivotal Phase 3 clinical trial; establish large-scale manufacturing, and deliver 100 million doses of NVX‑CoV2373 beginning as early as late 2020.

The Coalition for Epidemic Preparedness Innovations is also investing up to $388 million, and the Department of Defense is investing up to $60 million of funding to advance the clinical development of NVX‑CoV2373.

As of September 24, 2020, Novavax stated it 'has continued to scale-up its manufacturing capacity, currently at up to 2 billion annualized doses, once all capacity has been brought online by mid-2021.'

NVX-CoV2373 is a vaccine candidate indicated as a SARS-CoV-2 coronavirus vaccine to prevent COVID-19 disease. In preclinical trials, NVX-CoV2373 demonstrated efficient binding with receptors targeted by the virus, a critical aspect for effective vaccine protection.

Novavax is evaluating two intramuscular immunizations of 5 and 25 μg NVX Cov2373, with and without its Matrix-M adjuvant, in a Phase I trial. NVX-CoV2373 was reported stable and will allow handling in a liquid formulation that can be stored at 2°C to 8°C, allowing for successful cold chain management with existing infrastructure.

October 27, 2020 - Novavax, Inc. announced updates on its Phase 3 clinical development program of NVX-CoV2373. The Company also announced that it will present data from its ongoing Phase 1/2 clinical trial, including new Phase 2 reactogenicity data on October 30, 2020, during the U.S. Center for Disease Control and Prevention’s Advisory Committee on Immunization Practices’ meeting.

September 24, 2020 - Novavax, Inc. announced that it has initiated its first Phase 3 study to evaluate the efficacy, safety, and immunogenicity of NVX-CoV2373, Novavax’ COVID-19 vaccine candidate. The trial is being conducted in the United Kingdom (UK), in partnership with the UK Government’s Vaccines Taskforce, and is expected to enroll and immunize up to 10,000 individuals between 18-84 years of age, with and without relevant comorbidities, over the next four to six weeks.

September 15, 2020 - Novavax announced an amendment to its existing agreement with Serum Institute of India Private Limited (SIIPL) under which SIIPL will also manufacture the antigen component of NVX‑CoV2373, Novavax’ COVID‑19 vaccine candidate. With this agreement, Novavax increases its manufacturing capacity of NVX-CoV2373 to over 2-billion doses annually, when all planned capacity has been brought online by mid-2021.

September 10, 2020 - Novavax, Inc. announced it will participate in five upcoming investor conferences. A topic of discussion will be Novavax’s COVID-19 vaccine candidate, NVX-CoV2373.

September 8, 2020 - Nine CEOs sign historic pledge to continue to make the safety and well-being of vaccinated individuals the top priority in the development of the first COVID-19 vaccines.

September 2, 2020 - Novavax announced the publication in The New England Journal of Medicine of Phase 1 data from its Phase 1/2 clinical trial of NVX‑CoV2373, its COVID‑19 vaccine candidate. The publication offers further detail on the previously announced results, in which NVX‑CoV2373 demonstrated a reassuring safety and reactogenicity profile and induced robust antibody responses numerically superior to that seen in human convalescent sera.

August 31, 2020 - Novavax, Inc. announced it has reached an agreement in principle with the Government of Canada to supply up to 76 million doses of NVX-CoV2373, Novavax’ COVID-19 vaccine candidate. Maryland-based Novavax stated: Novavax expects to supply doses of NVX-CoV2373 to Canada beginning as early as the second quarter of 2021.

August 24, 2020 - Novavax announced that the first volunteers have been enrolled in the Phase 2 portion of its ongoing clinical trial to evaluate the immunogenicity and safety of NVX-CoV2373, Novavax’ COVID-19 vaccine candidate. The Phase 2 clinical trial expands on the age range of the Phase 1 portion by including older adults 60-84 years of age as approximately 50 percent of the trial’s population.

August 17, 2020 - Novavax, Inc. announced the beginning of a Phase 2b clinical trial in South Africa to evaluate the efficacy of NVX-CoV2373, Novavax’ COVID-19 vaccine candidate which uses proprietary nanoparticle technology and includes Novavax’ proprietary Matrix‑M™ adjuvant. Dr. Shabir Madhi, Professor of Vaccinology at Wits University, will lead the clinical trial, which is supported in part by a $15 million grant from the Bill & Melinda Gates Foundation. Novavax expects that, if approved in South Africa, its COVID-19 vaccine would ultimately be supplied to South Africa through Novavax’s recently announced collaboration with the Serum Institute of India.

August 14, 2020 - Novavax, Inc. announced it has signed a Heads of Terms with the Government of the United Kingdom (UK) for the purchase of 60 million doses of NVX-CoV2373, Novavax’ COVID-19 vaccine, and a Phase 3 clinical trial to assess the efficacy of the vaccine in the UK population. Novavax will also expand its collaboration with FUJIFILM Diosynth Biotechnologies, which is expected to produce up to 180 million doses annually in the UK.

August 13, 2020 - Novavax and SK bioscience announced a development and supply agreement for the antigen component of NVX-CoV2373, Novavax’ COVID-19 vaccine candidate, for supply to global markets including the COVAX Facility. In addition, the companies have signed a letter of intent with the Republic of Korea’s Ministry of Health and Welfare to work toward broad and equitable access to NVX-CoV2373 in South Korea. Under the terms of the agreement, SK bioscience will manufacture the vaccine antigen component for use in the final drug product globally during the pandemic period.

August 7, 2020 - Novavax and Takeda announced a partnership for the development, manufacturing, and commercialization of NVX‑CoV2373, Novavax’ COVID‑19 vaccine candidate, in Japan. NVX‑CoV2373 is a stable, prefusion protein made using Novavax’ recombinant protein nanoparticle technology and includes Novavax’ proprietary Matrix‑M™ adjuvant. Takeda will receive funding from the Government of Japan’s Ministry of Health, Labour and Welfare (MHLW) to support the technology transfer, establishment of infrastructure, and scale-up of manufacturing. Takeda anticipates the capacity to manufacture over 250 million doses of the COVID-19 disease prevention vaccine per year.

August 7, 2020 - Several days after making some headlines with a press release about the data, the Novavax vaccine effort has published on Medrxiv. The reactions to the vaccine itself look fine. Overall, there seem to be no overt safety signs to cause any concern.

August 6, 2020 - Novavax announced a license agreement with Serum Institute of India Private Limited for the development and commercialization of NVX‑CoV2373, in low- and middle-income countries and India. This agreement excludes major upper-middle and high-income countries, for which Novavax continues to retain rights.

July 27, 2020 - The US government issued a federal task order reserving production capacity at one of Texas A&M University System College Station's facilities. This task order is valued at about $265 million, announced the university on July 27, 2020.

July 7, 2020 - Novavax, Inc. announced that it has been selected to participate in Operation Warp Speed and has been awarded $1.6 billion by the U.S. federal government to complete late-stage clinical development, including a pivotal Phase 3 clinical trial; establish large-scale manufacturing; and deliver 100 million doses of NVX‑CoV2373, Novavax’ COVID-19 vaccine candidate, as early as late 2020.

June 15, 2020 - Novavax, Inc. announced that it has entered into an agreement to sell Series A Convertible preferred stock that could generate gross proceeds of approximately $200 million.

June 8, 2020 - Novavax announced that Gregory M. Glenn, M.D., President of Research and Development, will join other vaccine industry leaders for a panel discussion at 2020 BIO Digital. “We are seeing neutralizing titers in the 10,000 range in non-human primates." And, the company expects results and plans to start a Phase II trial, and has the capacity to manufacture 100 million doses in 2020.

June 4, 2020 - Novavax announced that the company has been awarded a contract by the U.S. Department of Defense (DoD) for the manufacturing of NVX‑CoV2373, Novavax’ COVID-19 vaccine candidate. NVX‑CoV2373 consists of a stable, prefusion protein antigen made using its proprietary nanoparticle technology and includes Novavax’s proprietary Matrix‑M™ adjuvant.

May 25, 2020 - Novavax, Inc. announced enrollment of the first participants in a Phase 1/2 clinical trial of its coronavirus vaccine candidate, NVX‑CoV2373, a stable, prefusion protein made using its proprietary nanoparticle technology. Preliminary immunogenicity and safety results from the Phase 1 portion of the trial are expected in July 2020.

May 11, 2020 - Novavax, Inc. announced that the Coalition for Epidemic Preparedness Innovations (CEPI) will invest up to $384 million of additional funding, on top of $4 million it invested in March, to advance the clinical development of NVX-CoV2373, Novavax’ coronavirus vaccine candidate against SARS-CoV-2. The additional funding from CEPI will also support the rapid scale-up of the NVX-CoV2373 vaccine antigen, as well as Novavax’s proprietary Matrix-M™ adjuvant, which is expected to enhance immune responses by stimulating high levels of neutralizing antibodies.

Novavax reported its Phase 1 portion of its Phase 1/2 clinical trial, NVXCoV2373 was generally well-tolerated and elicited robust antibody responses numerically superior to that seen in human convalescent sera. NVX-CoV2373 is also being evaluated in two ongoing Phase 2 studies, which began in August; a Phase 2b trial in South Africa, and a Phase 1/2 continuation in the U.S. and Australia.

Novavax’ first pivotal Phase 3 clinical trial, begun in September in partnership with the U.K. Government’s Vaccines Taskforce, will be expanded from 10,000 to 15,000 volunteers, some of whom have been recruited through the National Health Service (NHS) Vaccine Registry. The trial protocol calls for unblinding of data once 152 participants have achieved mild, moderate or severe endpoints. Two interim analyses are planned once 66 and 110 endpoints have occurred.

Novavax’ pivotal Phase 3 clinical trial is being conducted with support from the U.S. Government through Operation Warp Speed. The trial design is harmonized with those of other leading companies, and calls for the enrollment of up to 30,000 participants in the U.S. and Mexico, with proportional representation among diverse populations most vulnerable to COVID-19 distributed across race/ethnicity, age and those living with co-morbidities. The trial protocol will be posted on Novavax’ website upon initiation.

Clinical Trial NCT04368988: Evaluation of the Safety and Immunogenicity of a SARS-CoV-2 rS (COVID-19) Nanoparticle Vaccine With/Without Matrix-M Adjuvant. The Phase 1/2 clinical trial is being conducted in two parts. 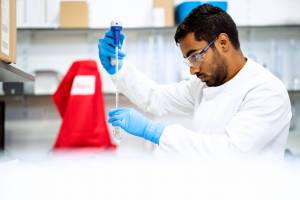 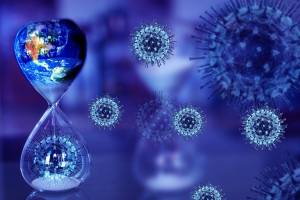