Ervebo, Ebola Zaire Vaccine, Live, formerly known as V920, is a recombinant, replication-competent Ebola vaccine, consisting of a vesicular stomatitis virus (VSV), which has been genetically engineered to express a glycoprotein from the Zaire ebolavirus so as to provoke a neutralizing immune response to the Ebola virus.

Ervebo's active ingredient is live Vesicular Stomatitis Virus, in which its surface protein has been replaced with that of Zaire ebolavirus. Inactive ingredients include recombinant human serum albumin, tromethamine (Tris) buffer. This vaccine contains a trace amount of rice protein.

The U.S. FDA granted this application Priority Review and a Tropical Disease Priority Review Voucher on September 17, 2019. The FDA also granted Breakthrough Therapy designation for Ervebo to facilitate the development and scientific evaluation of the vaccine.

On December 19, 2019, the FDA announced the approval of Ervebo, the first FDA-approved vaccine for the prevention of Ebola virus disease (EVD), caused by Zaire ebolavirus in individuals 18 years of age and older.

Merck announced on February 15, 2020, that 4 African countries, including the Democratic Republic of the Congo, Burundi, Ghana, and Zambia, have approved the use of ERVEBO.

Since the beginning of the Ervebo vaccination program in central Africa in 2019, approximately 300,000 persons have been vaccinated with the ERVEBO vaccine. Merck is working to initiate the manufacturing of licensed vaccine doses and expects these doses to start becoming available in approximately the 3rd quarter of 2020.

The Joint Project Manager for Chemical, Biological, Radiological, and Nuclear Medical (JPM-CBRN) helped provide a test that allowed Merck to test human and non-human primate samples. Comparing the two samples is part of the FDA’s requirements for licensure.

Merck & Co. Inc. licensed the global R&D and manufacturing rights from Newlink Genetics Corp.'s phase I Ebola vaccine in 2014. The Public Health Agency of Canada, which originally developed the vaccine, retained noncommercial rights in the agreement.

The Ervebo vaccine is indicated for the prevention of disease caused by Zaire ebolavirus in individuals 18 years of age and older. The duration of protection conferred by ERVEBO is unknown. ERVEBO does not protect against other species of Ebolavirus or Marburgvirus. Effectiveness of the vaccine when administered concurrently with antiviral medication, immune globulin (IG), and/or blood or plasma transfusions is unknown.

Ebola cases are very rare in the U.S., and those that have occurred have been the result of infections acquired by individuals in other countries who then traveled to the U.S., or health care workers who became ill after treating patients with EVD. In September 2014, a man arrived in Dallas, Texas, infected with Ebola, and was treated at a local hospital. This person passed the virus to the healthcare staff.

Ebola virus can be detected in blood after the onset of symptoms. It may take up to 3 days after symptoms start for the virus to reach detectable levels. The CDC’s new Health Alert recommends that Ebola virus testing be conducted only for people who have an epidemiologic risk factor within 21 days of symptom onset and who have an Ebola compatible clinical syndrome.

Following vaccination with the Ervebo vaccine, individuals may test positive for anti-Ebola glycoprotein (GP) antibody and/or Ebola GP nucleic acid or antigens. GP-based testing may have limited diagnostic value during the period of vaccine viremia, in the presence of vaccine-derived Ebola GP, and following antibody response to the vaccine.

Polymerase chain reaction is one of the most commonly used diagnostic methods because of its ability to detect low levels of the Ebola virus, says the CDC.

The Ervebo vaccine is administered as a single-dose intramuscular injection. You will get this vaccine as an injection at the top of your arm.

Merck says 'do not administer Ervebo to individuals with a history of a severe allergic reaction (e.g., anaphylaxis) to any component of the vaccine, including rice protein.' And, the safety and effectiveness of Ervebo have not been assessed in immunocompromised individuals.

And, there are no adequate and well-controlled studies of Ervebo in pregnant women, and human data available from clinical trials with Ervebo are insufficient to establish the presence or absence of vaccine-associated risk during pregnancy. The decision to vaccinate a woman who is pregnant should consider the woman’s risk of exposure to Zaire ebolavirus.

Furthermore, previous clinical studies of Ervebo did not include sufficient numbers of subjects 65 years of age and older to determine whether they respond differently from younger subjects.

June 26, 2020 - The World Health Organization (WHO) marked the end of the 10th outbreak of Ebola virus disease in the Democratic Republic of the Congo. About 303,000 people were vaccinated with the ERVEBO is a recombinant, replication-competent Ebola vaccine.

May 26, 2020 - Merck and IAVI announced a collaboration to develop an investigational vaccine targeted against the SARS-CoV-2 coronavirus. This vaccine candidate will use the recombinant vesicular stomatitis virus (rVSV) technology that is the basis for Merck’s Ebola Zaire virus vaccine, ERVEBO, which was the first rVSV vaccine approved for use in humans.

May 6, 2020 - The Lancet: Pregnancy and breastfeeding in the context of Ebola: a systematic review.

February 21, 2020 - ERVEBO vaccine is registered by National Health Authorities in the Democratic Republic of Africa, Burundi, Ghana, and Zambia.

February 14, 2020 - Merck confirmed that four African countries, including the Democratic Republic of the Congo, have approved the ERVEBO vaccine. ERVEBO has now been registered by National Health Authorities in the following countries in Africa – DRC, Burundi, Ghana, and Zambia. Approvals in additional countries in Africa are anticipated in the near future, said Merck. As previously announced, Merck is working to initiate the manufacturing of licensed doses and expects these doses to start becoming available in approximately the third quarter of 2020.

December 16, 2019 - In the Health Advisory #423, the CDC says ‘there have been 49 travelers since August 2018 who were ill when returning to the USA from the Democratic Republic of Congo (DRC) or the surrounding African countries. 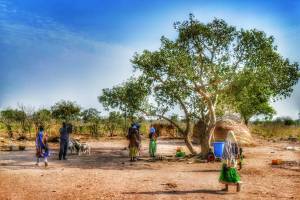